Now we’re kind of OK on the game engine in Flash, Ulu wanted to step away from its 12=12 Unity version by adding “character” and “story”.

But what could we tell with numbered cubes, an orb and psyche backgrounds?

We didn’t want to break all what we’ve already done to make up our story, but we didn’t want either to glue meaningless stuff on it to fit in in the game. So, if you love video games you can read more information about the next games of the year that you should check out before it’s too late.

So we brainstormed on the subject.

Here are few notes and sketches about the story which emerge.

What’s the orb?
The orb is an idea. A souvenir you can’t catch instantly. Something like the title of this song which came back in your head while you woke up this morning. Like the name of this girl at your 5 years old birthday party you saw on your way back home yesterday evening. Like this meeting you’re sure is important but can’t remember why before you drank your first coffee.

What are the cubes?
The cubes represent the fog around these lost ideas and souvenirs. You have to clear them to recover the memory of your ideas/souvenirs. These are the possibilities you have to dismiss in order to find the only solution.

So we decided the story would tell about brain’s stuff and lost ideas.

But why these ideas would be lost?
Because the brain is full with drugs. That would explain the psyche backgrounds. And drugs are more and more efficient, that would be why the difficulty increases. Yeah, like in this video. First the man’s quite OK. But then he’s bad tripping on XTC and, ahah, see how he’s on magic mushroom?

Hmm, no, bad idea. It’s not funny. And we don’t want to make drugs promotion. We’re no teenagers.

So what?
Maybe the guy got hit on the head. Or maybe he was bitten by a snake or stung by an insect. Maybe he’s not someone who lost ideas but a zombie who lost his brain.

Bored of playing the same games all over again? Check out Escape from Tarkov a new video game that you won’t stop playing once you start it.

And so Ulu’s came with this first drawing : 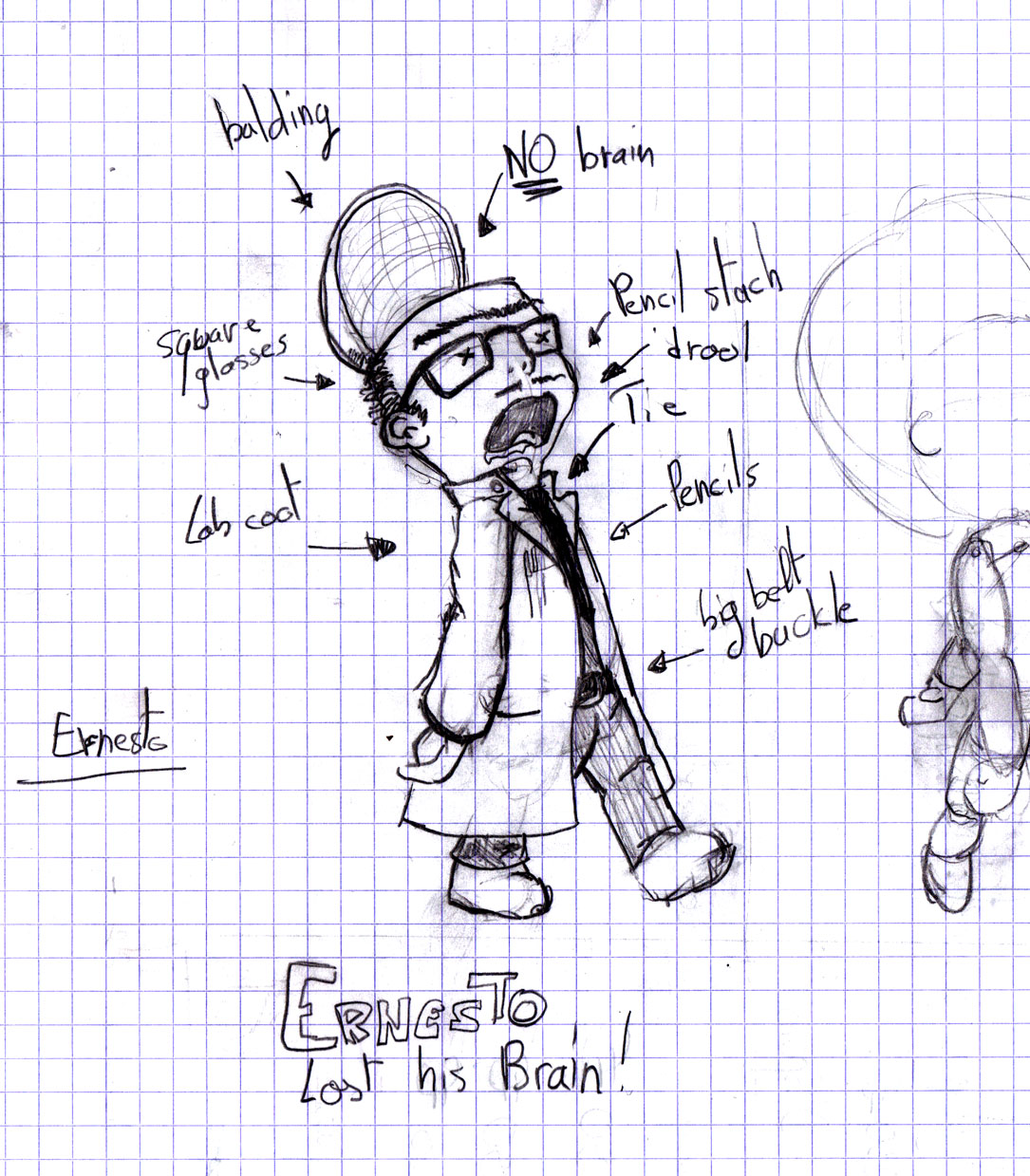 And he told us this story:

“Ernesto is a scientist in the Amazonian rainforest. Something happened to him. His head was scalped. And so he’s looking for his brain. And he’s walking and walking in the forest, and each time he thinks he has found his brain, he hasn’t. The brain is in another castle! Or maybe it’s just bits of his brain. Or he licked a psychoactive toad and he just thinks he lost his brain!”

OK, we had a name now: Ernesto!

But the story wasn’t quite satisfying.

Then we let all this stew.

What if Ernesto was a kind of biologist or biochemist?
He would be in the rainforest because there he can find all what he need to study.
But he would study alone. Because his researchs are barely legal and he’s rejected by his peers. And he wants to prove them he’s right. Just like Charles F. Muntz in Up movie.

And he’s overwhelmed by his experiments.

Or maybe more like William Hurt in “Altered State“.

Yeah, Ernesto must be working on genetic regression.

He’s sure he can find the missing link.

And that’s why he’s in the rainforest. Because he can observe rare species humans have never studied. And because he’s a little mad and obsessed by genetic mutations. And because he wants to test his discoveries on humans.

And yeah, he found THE formula. He made the potion.

He just has to test it.

He’s so happy that he mistakes his home-made strange purple fruits liquor with the potion.

And he begins to regress… Now, we got clues to answer our first questions :

What’s the orb?
The orb is a missing part of the antidote formula. It may be a particular gene or cell. Ernesto has to find several ones, in a limited time.

What are the cubes?
The cubes are unwanted genes, cells and microscopic stuff that prevent Ernesto to find his needed cell.

Why 12?
Because Ernesto’s manipulations are on Chromosome 12.

And so we have a way to pass from a story view to the game view : Ernesto is looking through his microscope.

These are the first lines of our story.

We’re meeting Ernesto and we learn everyday new details on his life, his general mood, his thoughts and believings, the silly things he’s done as a child, etc.

Sure we won’t tell everything in this game, but the more you know your characters, the easier you tell its story.

Now, I’ve got to leave you to make this post read over and correct by Ernesto’s giant sloth pet.